What Would Tubman Say?

Do you agree that the US Treasury’s 20+ year delay in providing accessibility for the Blind is unacceptable? Do you believe that we must redesign currency including the portraits of our chosen heroes like Tubman and the suffragists in this administration and that we cannot wait until 2026 and beyond for updated banknotes?  Do you want our currency to have state of the art security features to protect us from counterfeiters?

Well, right now we are stuck in a lose- lose-lose situation, a government gridlock that denies us accessibility, our Tubmans and counterfeit resistant bills.  That would be unacceptable to Harriet Tubman and is unacceptable for us. And we must get government unstuck. Will you join us to tell the Treasury and the Federal Reserve they must breakthrough the gridlock?

What would Harriet say? Look at this familiar picture of Harriet Tubman with family and friends. On the right side, sits a family friend, “Blind Auntie” Parker.  By 1896, Tubman purchased 25 acres more abutting her property to create the Tubman Home for Aged and Indigent Negroes. Tubman’s instincts led her to serve her fellow citizens.  She had a win- win mindset.  And we hope that when we see her likeness on our currency, we will be called to our higher selves too.  But before Tubman gets the honor of being the new face of the $20, we must do something she would have done: Insist on accessibility for the visually impaired. 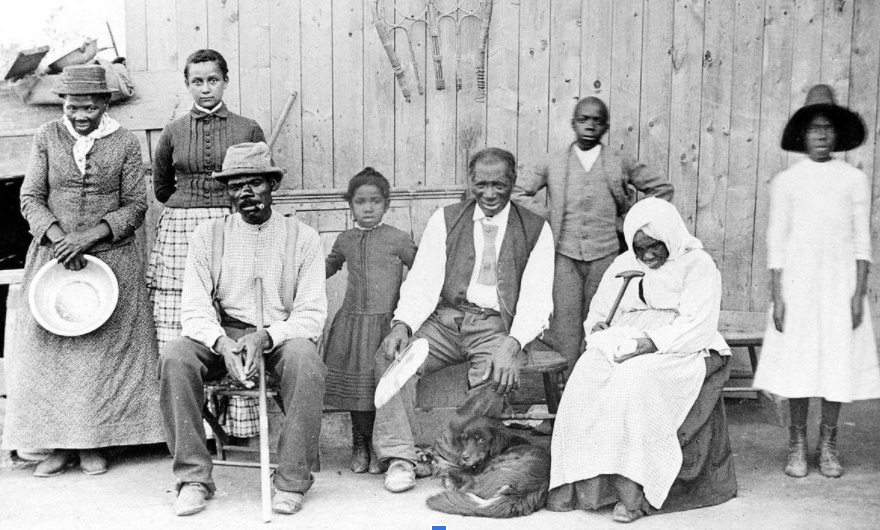 We know what Harriet would say if she found out that the US Treasury was dragging its feet on including a tactile feature on US Banknotes to help visually impaired people denominate banknotes independently. She would be upset that while 180 other countries have created accessibility on their currency for the visually impaired, the U.S. has not.

Check out the 23 year timeline below from the Government Accounting Office.  They start the timeline off in 1997, but the accessibility issue was well known much earlier. After many requests from associations for the blind, The US Treasury conducted a study in 1983 of what features would be needed in currency for the visually impaired. This study and others conducted after by the US Treasury, created standards cited and used by other countries since the 1960s!   These studies confirmed what Treasury has long avoided, the need for a raised tactile feature (RTF) is real. 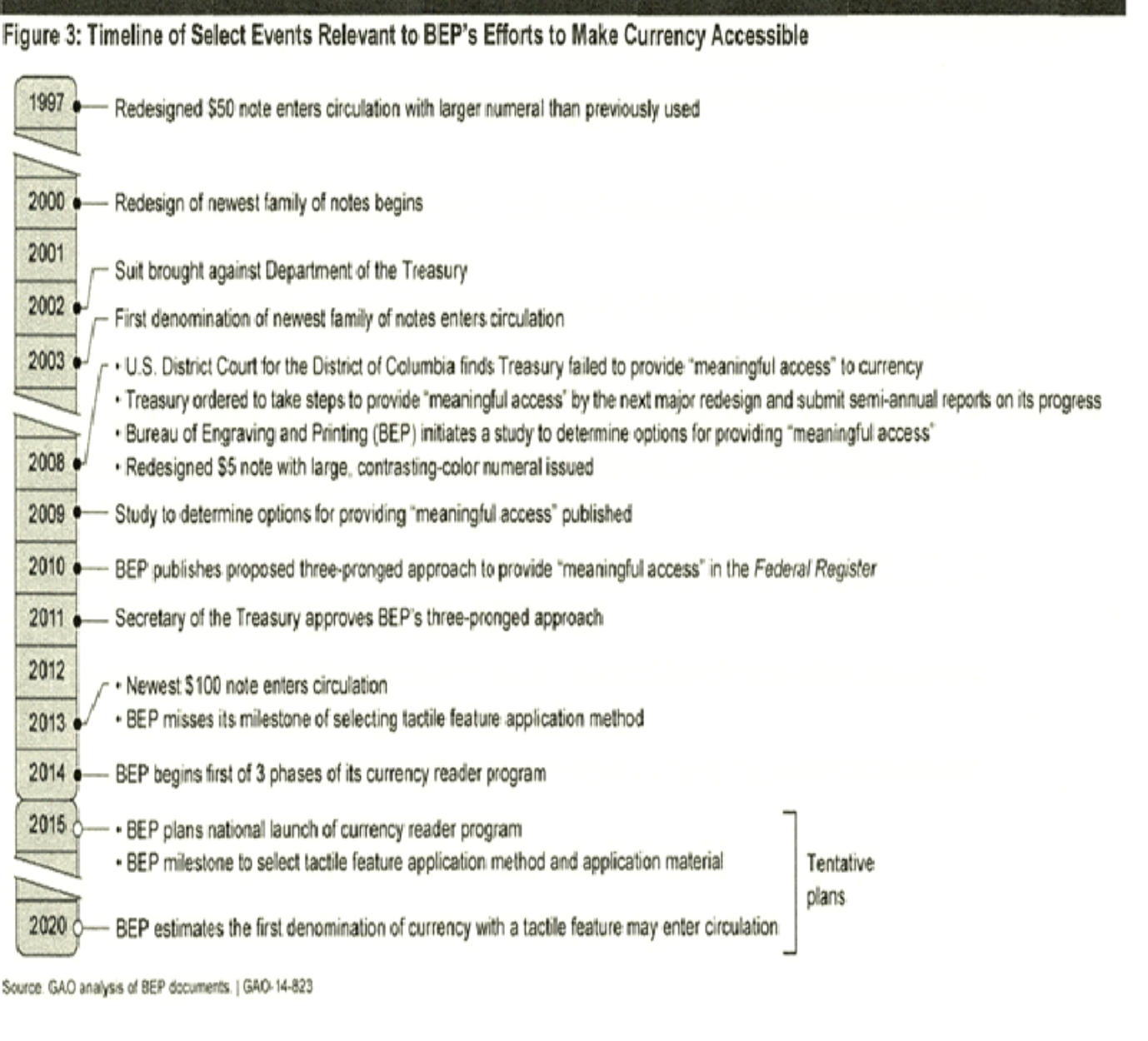 What indeed was the terrible security issue that was suddenly recognized in February of 2016 that then put the redesign and tactile feature on hold for another TEN years?! The raised tactile feature had been figured out for the most part and in use around the world for more than a decade. Major counterfeiting threats based in North Korea in 2009, and in Peru in 2014 were tracked, so nothing new there.  More startling was a 250 million dollar bust in 2014 involving a small automotive repair business owner turned counterfeiter in Canada.

These counterfeiting threats and methods gave U.S. counterfeit deterrence agents and designers insights into developing better ways to deter counterfeiting and implement novel security measures.   And adding a tactile feature is considered complementary to security by most countries. But the delays and language Treasury uses in their semiannual status reports to the Court, appears to drift further away from providing the tactile feature.  Their latest status report on 3-15-2021, announced that they will use the less costly, less effective RTF which is based on an intaglio method for their first tactile bill, the $10 starting in 2026!

There are no logical reasons for the delay. We have not been given any reasons. not even secret weapons of mass destruction.  We are left to suspect ACD/Federal Reserve/Treasury backed off due to costs and a desire to not change the physical appearance of the currency which might hurt the feelings of those in the boys’ club.

Who cited the major security issue and made the decision to delay and set the 2026 date? It was the “ACD”, the Advanced Counterfeit Deterrence committee with representatives from: Treasury, Bureau of Engraving & Printing, The Federal Reserve (a public- private organization), the Secret Service and Currency Technology Office (Bank Operations).  The latter is part of the Federal Reserve.

HMMMM? The Federal Reserve has supported “meaningful access” as long as the costs were “reasonable… to the public more broadly.” ~Louise L. Roseman Director September 5, 2014.  Her retirement was announced on February 3, 2016.

And by the way who do you think suffers from the circulation of the counterfeit money? Banks who have sophisticated equipment that can tell the difference between real issue and the best fakes, reject fakes.  Who suffers from most of the fake money floating around?

Fake money hurts people who use cash, who do not have access to credit or banks.

Fake money hurts the visually impaired who cannot see defects in currency and even if they have a currency reader, the readers cannot tell a real bill from a fake.

Fake money threatens the credibility and therefore the security of our money supply.

So, we ask you again.  Do you agree that the US Treasury 20+ year delay in providing accessibility for the Blind is unacceptable? Do you believe that we must redesign currency including the portraits of our chosen heroes like Tubman and the suffragists in this administration and that we cannot wait until 2026?  Join us in telling Secretary Janet Yellen and Federal Reserve Board Chairman, Jerome Powell that visually impaired people have waited long enough for accessible currency, the public has waited long enough for secure currency and we have waited long enough for currency that tells all our story. We can make this a win-win-win situation.