Women on 20s on the March

Women On 20s is proud to be an official partner organization of the Women’s March On Washington.

So much has been written and reported from the historic women’s marches both here and abroad. But we’re excited to share with you something you may not have seen that warmed our hearts and hopefully will lift yours. It’s this magnificent display at the U.S. Treasury Department in Washington of a quartet of American heroes that adorn our paper currency, including, yes, HARRIET TUBMAN on the $20 bill! To quote the popular chant from the march: THIS IS WHAT DEMOCRACY LOOKS LIKE! 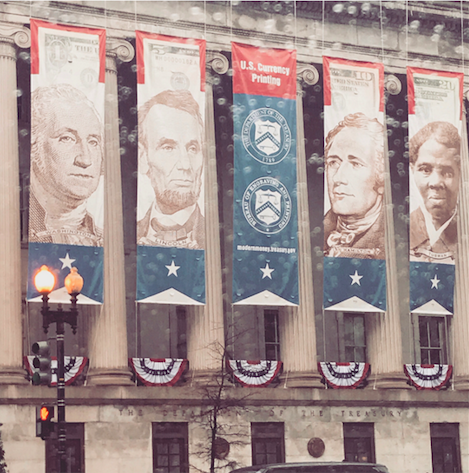 These larger than life banners herald the great currency change to come and seem to have been revealed at the same time the Tubman Home in Auburn, New York was designated a national park on January 10th.  Another great step forward in making women’s contributions and value visible in our every day experience.

While some our core group of W20 marchers missed seeing the banners, many of you reported to us that not only did you see the Treasury display, but you heard crowds calling out Harriet Tubman’s name as they marched past. How exciting that our favorite freed slave and freedom fighter made an appearance just in time to be an inspiration for people looking to make a real difference in the lives of others and to defend the freedoms and values that make our nation great.

We’d like to hear about your experiences and takeaways from the march. Which signs resonated with you? Which speakers? Did you meet new people? Make new resolutions?Please take a moment here to tell us in both words and images.

At this time of renewed spirit for coming together and working for equal rights and protections, we aim to help the march organizers build on this incredible momentum. For starters they are proposing 10 actions for the first 100 days. You are one of the half-million people who voted to bring historic change to our paper currency. And perhaps you’ll be inspired to lend your voice to the chorus calling for continued positive change to elevate women and all Americans.