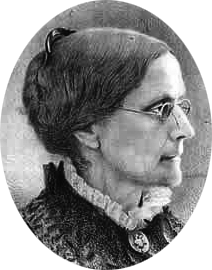 Susan Brownell Anthony was born in 1820 into a Quaker family where men and women were considered equals. Committed to social justice at an early age, she worked tirelessly on causes to improve the lives of laborers, African Americans and women. Though she was an ardent abolitionist and temperance campaigner, Anthony is most remembered as a feminist, who in her 50-year partnership with Elizabeth Cady Stanton, laid down and executed the strategy that eventually would lead to winning women the right to vote.

The second of seven children, Anthony was schooled early by her father to be self-supporting and community-minded. Her family’s farm near Rochester, N.Y. served as a meeting place for such famed abolitionists as Frederick Douglass, and as a teenager, Anthony collected anti-slavery petitions. After working 12 years as a teacher to help with family expenses, she threw herself headlong into a career as a reformer. A gifted orator, she supported herself on her speaking fees. But when she was denied the right to speak before a temperance convention because she was a woman, she realized that for women to be taken seriously, they needed the right to vote.

In 1851, Anthony was introduced to Elizabeth Cady Stanton, who had been one of the organizers of the Seneca Falls Convention in upstate New York, where she had introduced the controversial resolution in support of women's suffrage. The two soon formed a close friendship and began working as a team. Anthony traveled far and wide, organizing, circulating petitions and giving speeches, while Stanton, homebound with seven children, incubated the ideas, rhetoric and writings that shaped the nascent women’s rights movement. Stanton once said of her collaboration with Anthony, “I forged the thunderbolts, she fired them.” By 1860 they had lobbied successfully for legislation granting married women improved rights in New York State. Six years later the pair established the American Equal Rights Association. And together they published a weekly, The Revolution, with the motto “Men their rights and nothing more; women their rights, and nothing less.”

After the Civil War, Anthony turned her attention entirely towards women’s suffrage. She lobbied yearly before Congress. She voted in the 1872 presidential election, for which she was arrested, tried, convicted, and fined $100. She refused to pay the fine, but because no enforcement action was taken, the case never made it to U.S. Supreme Court as she had hoped. Anthony knew that women’s suffrage was inevitable; she is immortalized with a quote from her final suffrage speech: “Failure is impossible.” She died in 1906 and 14 years later the 19th Amendment granting women the vote was signed into law and became known as the Susan B. Anthony Amendment. In 1979, the U.S. Mint issued the Susan B. Anthony dollar -- first coin to honor a real (as opposed to an allegorical) woman. Production ended a few years later because the coin was frequently mistaken for the quarter.