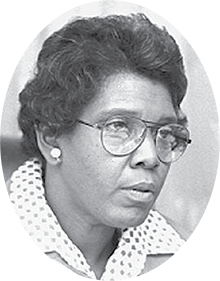 Barbara Jordan spent a lifetime breaking racial and gender barriers. Most notably, she was the first African American US congresswoman to come from the deep South, the first female representative from Texas and the first African American woman elected to the Texas Senate. There had not been a black Texas state senator since 1883. A gifted orator, she famously delivered the keynote address at the 1976 Democratic National Convention -- the first black woman ever to do so. “My presence here,” she said, “is one additional bit of evidence that the American dream need not forever be deferred.”

Born in 1936, the daughter of a Baptist minister and a domestic worker, Jordan grew up in a poor Houston neighborhood and attended segregated schools. She learned early from her parents to set goals and work to achieve them. In high school she won national oratorical competitions. Later at Texas Southern University (an HBCU), she led her debate team to wins over Brown and Yale and a draw with Harvard. "When an all-black team ties Harvard, it wins," she said. In 1959, after graduating from law school, she passed the bar exam in Texas, becoming one of only three African American woman then licensed to practice law in the state of Texas, and opened her first office in her parents’ home.

After campaigning to elect John F. Kennedy and his running mate, fellow Texan Lyndon Baines Johnson in 1962, Jordan made her first bid for public office, but it took her three tries to make history, when she was elected to the Texas State Senate from a newly created district in 1967.  Well-known Texas political reporter Molly Ivins once recalled, “When she first came to the Texas Senate, one Senator used to call her ‘that old nigamammy washer woman.’”  But Jordan wasn’t deterred. She became president pro tem, and helped usher through the state's first law on minimum wage.

With LBJ’s help, Jordan was elected to the US Congress in 1972 and he made sure she drew plum committee assignments. During her three terms, she worked to expand the Voting Rights Act and enforce civil rights procedures. But it was during the televised hearings to impeach Richard Nixon over the Watergate scandal that Jordan -- a member of the House Judiciary Committee --  stirred the nation with her incisive questioning and impassioned defense of the Constitution. "I am not going to sit here and be an idle spectator to the diminution, the subversion, the destruction of the Constitution," she said during the proceedings.

Jordan ended her political career unexpectedly in 1979, after living for years with multiple sclerosis, though she never revealed her health problems publicly. She moved back to Texas and taught at the Lyndon B. Johnson School of Public Affairs at the University of Texas for 17 years. Jordan lived with a female companion for three decades until her death in 1996, though neither woman ever publicly identified as lesbian. It is widely believed that political and social pressures were why they did not disclose the nature of their longtime, caring relationship.

In 1994, President Clinton awarded her the Presidential Medal of Freedom.