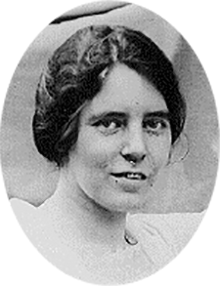 A leader in the fight for women’s rights for seventy years, Alice Paul advocated for a nonviolent civil disobedience campaign that included large-scale marches in Washington, DC, picketing at the White House, and hunger strikes in prison. Her tactics resulted in the passage of the Nineteenth Amendment to the US Constitution in 1920, giving women the right to vote. Soon after, she turned her attention to promoting an equal rights amendment to protect women from discrimination. She led the National Women’s Party for a half-century.

Born in Moorestown, New Jersey in 1885, Paul was a descendant of William Penn, the Quaker founder of Pennsylvania. The foundation of her activism was the Quaker tradition of public service and promotion of gender equality. Highly educated, she earned a BA in biology, an MA in sociology, a PhD in economics, and several graduate law degrees. While studying and working in England, Paul became acquainted with women suffragists and their militant tactics. She was arrested seven times and imprisoned three times, participating in several hunger strikes. Returning to the US in 1910, physically weakened but determined, she teamed up with London colleague Lucy Burns and together they began to lead the suffrage charge under the auspices of the National Woman Suffrage Association (NAWSA).

In 1913, the group organized the largest parade ever in Washington to coincide President Woodrow Wilson’s inauguration. Eight thousand marched and a half-million viewed the parade, many onlookers harassing the participants. Later, Paul used police inaction in protecting the marchers to garner public sympathy. Paul and Burns split from NAWSA in 1914 when the organization refused to support a push for a constitutional amendment and formed their own more radical party (which became the National Woman’s Party) to advocate for women’s enfranchisement. In 1917, they became the first protestors to picket the White House and spent 18 months there, displaying banners asking, “Mr. President, how long must women wait for liberty?”

Paul was arrested in October 1917 and spent seven long months in jail, organizing hunger strikes, enduring severe beatings along with the others. She was  force-fed raw eggs through a feeding tube and  assigned to solitary confinement and the psychiatric ward. Press coverage led to a public outcry and her eventual release. Public opinion soon swung in favor of the movement and, with President Wilson’s support, Congress ratified the Nineteenth Amendment to the US Constitution on August 26, 1920.