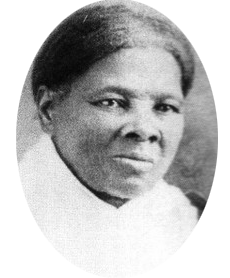 Considered by many the “Moses” of her time, escaped slave Harriet Tubman became one of the country’s leading abolitionists before the Civil War. She returned to the South an estimated 13 times to rescue her family and others from bondage as a “conductor” on what was known as the Underground Railroad, an elaborate secret network of safe houses leading to freedom in the North. Later, with her intimate knowledge of the geography and transportation systems of the South, she became a valuable asset to the Union army as a spy and scout. Her Herculean accomplishments were attributed to extraordinary courage, shrewdness and determination. The Quaker Thomas Garrett said of her, “If she had been a white woman, she would have been heralded as the greatest woman of her age.”

Harriet Tubman was born sometime between 1820 and 1825 to enslaved parents in Dorchester County, Maryland. Originally named Araminta, one of nine children, she saw her father freed and many of her siblings sold in the typically fractured slave family dynamic of the time. At 13 she suffered a crippling blow to the head while refusing to help restrain a captured escapee, resulting in a life of seizures, headaches and narcolepsy. She also began at that young age, experiencing visions and vivid dreams that she believed were revelations from God. In 1848, Tubman summoned her defiance and fled to Philadelphia by way of the Underground Railroad.

Soon, Tubman began her forays south back into Maryland, rescuing siblings, nieces, strangers and, on her last trip, her aging parents. She frequently outwitted her pursuers, using disguises and evasive tactics, later boasting she never lost a single passenger on the road to freedom. During the Civil War, Tubman, a gifted healer, nursed the wounded and served as a cook, scout and spy. Union soldiers relied on Tubman to guide them in unfamiliar territory, using her uncanny ability to navigate the landscape without detection. And in 1863, she led an armed raid that freed 700 slaves in South Carolina, giving her the distinction of being the first woman ever to lead a military expedition.

After the war, despite living in poverty, Tubman continued her service to others. She advocated for education and the vote for freed slaves and she cared for the elderly and poor. Later, she supported her friends Susan B. Anthony and Elizabeth Cady Stanton in the early struggles for women’s equality and suffrage, speaking passionately at events from Boston to Washington, D.C.  And finally, after retiring to a farm outside of Auburn, New York, and after a long process of appeals, she secured a pension for herself of $20 per month for her contributions to the Civil War effort. When she died in 1913, called “General Tubman” by her admirers, she was laid to rest with military honors –- one of the first recorded African American women to  serve in the military.