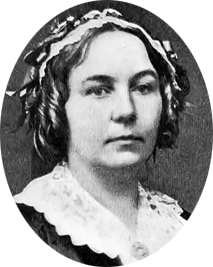 For fifty years, Elizabeth Cady Stanton was at the forefront of the fight for women’s equality and voting rights. Her Declaration of Sentiments, delivered in 1848 at the Seneca Falls Convention near her home in upstate New York, signaled the beginning of the women’s suffrage and equal rights movements in the United States. Even while raising seven children, Stanton was a tireless campaigner. A gifted orator and prolific writer, she argued for equal rights in many spheres, including parental and custody rights, property ownership, employment and income, divorce and birth control. Like many women activists of her day, she also was an outspoken supporter of the 19th century temperance movement.

The daughter of a prominent attorney, Stanton was born in 1815 and became highly educated for a woman of her era. Besides her formal education in private academies, she learned from books in her father’s library that laws disproportionately favored men over women. She eventually was drawn to the abolitionist, temperance and women’s rights movements through visits to the home of her cousin, the reformer Gerrit Smith. In 1840 she married another reformer, Henry Stanton. Fittingly, they omitted the words “promise to obey” from their marriage oath and spent their honeymoon attending the World Anti- Slavery Convention in London. There, she bonded with a fellow activist, Lucretia Mott, over the fact that women were excluded from participating as delegates at the assembly.

Eight years later, Mott visited upstate N.Y. and she and Stanton hatched the Seneca Falls Convention. Declaring that “all men and women are created equal,” Stanton also advocated for the right of women to vote and called for changes in law and society to elevate the status of women. The Declaration was signed by the convention delegates. Stanton’s husband, along with others, opposed the demand for women’s suffrage, but attendee Frederick B. Douglass eloquently voiced his support.

In 1851, Stanton met Susan B. Anthony and the two began a 50-year collaboration that shaped the women’s movement through speeches and widely circulated articles and books. Anthony’s organization and campaigning abilities proved a perfect complement to Stanton’s eloquence. In 1869, Stanton became president of the National Woman’s Suffrage Association, a position she would hold for 21 years. She died in 1902, 18 years before women were granted the right to vote.